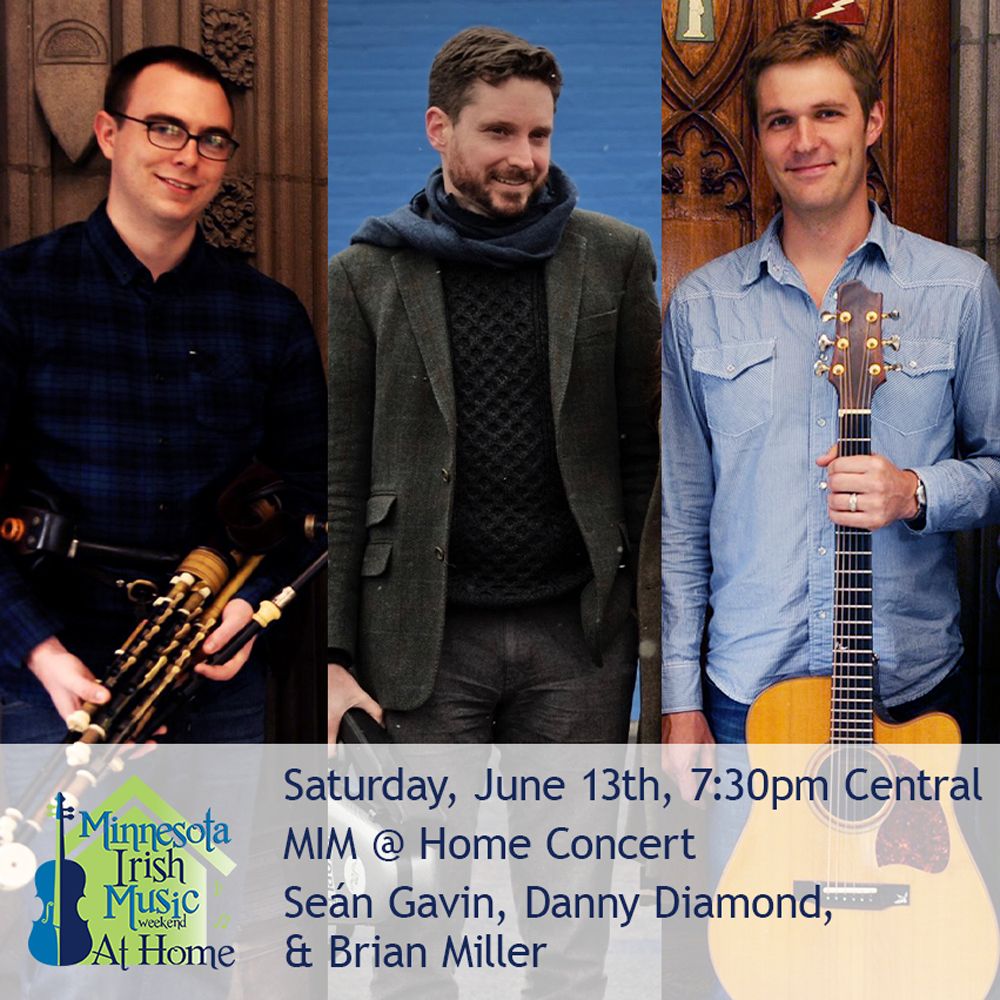 Seán Gavin (uilleann pipes, flute) is one of the most highly regarded Irish musicians of his generation. Growing up in Detroit, he was first encouraged to take up Irish music by his father, Clare-born fiddle player Mick Gavin. In 2016 he became the first and only musician born outside Ireland to win the prestigious Seán Ó Riada gold medal on the flute. Gavin’s most recent recording, Music from the Lost Continent, a collaboration with fiddler Jesse Smith, accompanist John Blake, and bodhrán player Johnny “Ringo” McDonagh, was hailed by The Irish Echo as “traditional music at its best!” Seán has also recorded with Nicgaviskey and Bua, and tours regularly with Téada, garnering top praise from Irish music critics around the globe. Currently, this master artist is a resident of the Twin Cities where he teaches at the Center for Irish Music, he also teaches and performs throughout North America and Ireland.

Danny Diamond (fiddle) comes from a renowned family of traditional musicians with a deep cultural heritage in the North of Ireland. Danny has toured worldwide, playing venues such as the Sydney Opera House, The Southbank Centre (London) and National Concert Hall (Ireland); and has shared the stage with artists such as The National and Justin Vernon (Bon Iver).

Brian Miller’s (guitar, bouzouki) intricate yet driving guitar style has made him one of the most sought after accompanists in the North American Irish music scene. Esteemed Irish music critic Earle Hitchner writes: “The backing of Miller on guitar flexes not just muscle but a fully complementary style.” Also a renowned traditional singer, he is the founder of the Traditional Singers Club of the Twin Cities. Brian is also a master of the bouzouki, an instrument that has been adopted into the Irish tradition in recent decades. He has performed across North America and in Ireland with various groups including Bua, Chulrua, The Máirtín de Cógáin Project and the Two Tap Trio. He has been featured on MPR’s All Things Considered, CBC Radio’s Canada Live, and Ireland’s RTE television, RTE radio and TG4 television.

This concert featuring master artists is one of six virtual concerts co-sponsored by the Celtic Junction Arts Center as part of the Minnesota Irish Music Weekend @ Home, a workshop-based festival presented by the Center for Irish Music, a music school based inside the CJAC building. Register for educational programs for children, teens and adults here. All concerts are in central standard time (CST) and will broadcast from the Center for Irish Music’s website. Unless otherwise noted, concerts will run for 60 minutes. Tune in 15 minutes early for pre-concert chat. Concerts are free, but a suggested donation of $10 per concert to help support our artists is appreciated.
To get a reminder about each concert, register for a concert pass on the festival’s website. https://centerforirishmusic.asapconnected.com/#CourseID=221914

The Center for Irish Music (CIM) is a nonprofit community music school located inside Celtic Junction Arts Center in the heart of St. Paul’s Hamline Midway area (across from Blackstack Brewery & Can Can Wonderland). CIM offers private lessons on 16 different Irish instruments and group classes for students of all ages taught by world-class teaching artists.