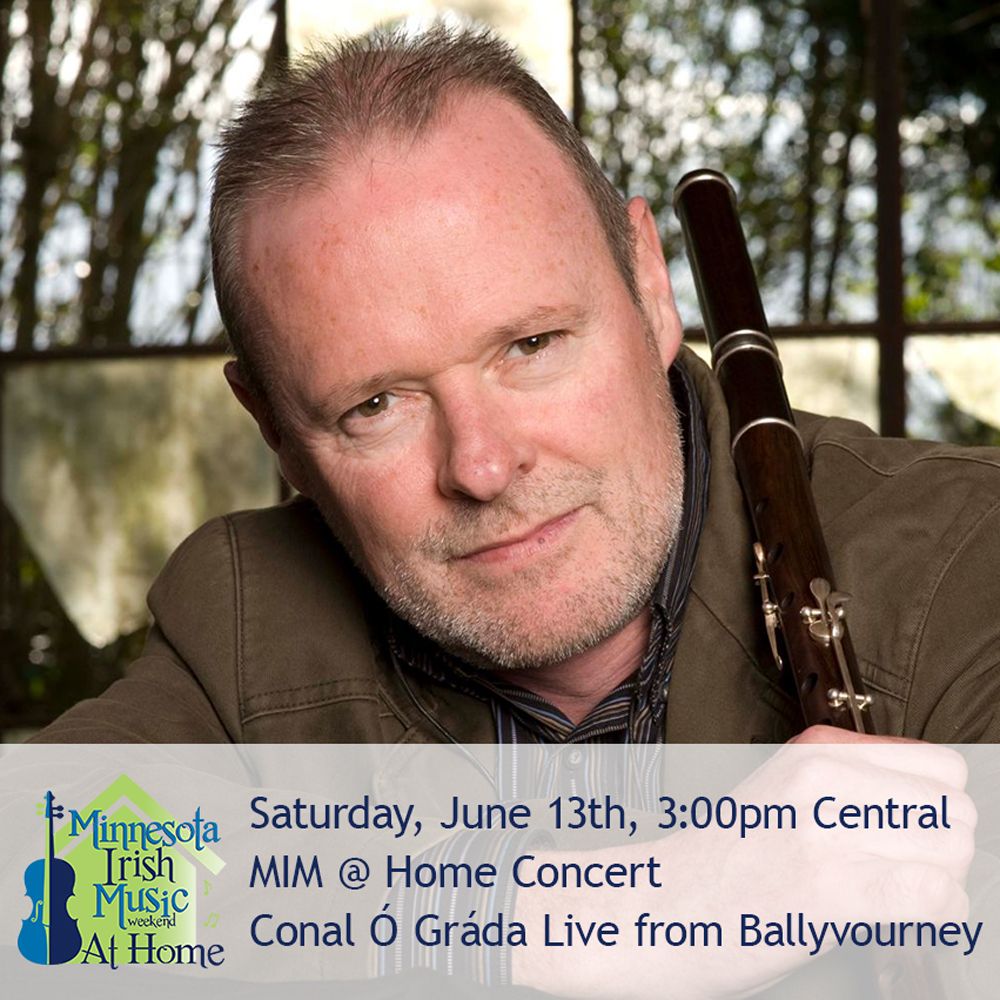 Conal Ó Gráda, born in Cork in 1961, has long been at the forefront of traditional Irish flute-playing and truly has one of its most distinctive sounds. A multiple All Ireland winner, Conal’s debut recording ‘The Top of Coom’ in 1990 is still regarded as a seminal recording of flute-playing. His second solo recording ‘Cnoc Buí’ was released in 2008 to widespread critical acclaim. He is also a member of the band Raw Bar Collective, with whom he released a new CD in February 2011 called ‘millhouse measure’s’. He is a co-founder of the community flute band ‘Banna Fliúit Loch a’Bhogaigh’ and is chairman of the traditional flute festival ‘Cruinniú na bhFliúit…the Flute Meeting’ which runs annually in Baile Bhúirne, Co. Cork.

Conal is an experienced teacher of both flute and tin whistle. As well as providing lessons to individuals and groups at all levels, both privately and at events all over the world, Conal is the resident flute tutor for University College Cork. He is also a guest tutor at University of Limerick. In 2012, Conal published a book on flute technique and styles called ‘An Fheadóg Mhór…Irish Traditional Flute Technique’. This has been hailed as the best instructional flute tutor published to date. https://www.conalograda.com

Conal Ó Gráda Live from Ballyvourney is one of six virtual concerts co-sponsored by the Celtic Junction Arts Center as part of the Minnesota Irish Music Weekend @ Home, a workshop-based festival presented by the Center for Irish Music, a music school based inside the CJAC building. Register for educational programs for children, teens, and adults here. All concerts are in central standard time (CST) and will broadcast from the Center for Irish Music’s website. Unless otherwise noted, concerts will run for 60 minutes. Tune in 15 minutes early for pre-concert chat. Concerts are free, but a suggested donation of $10 per concert to help support our artists is appreciated.To get a reminder about each concert, register for a concert pass on the festival’s website. https://centerforirishmusic.asapconnected.com/#CourseID=221914

This activity is made possible by the voters of Minnesota through an operating support grant from the Minnesota State Arts Board and an arts activity grant from the Metropolitan Regional Arts Council, thanks to a legislative appropriation from the arts and cultural heritage fund.