Inside the GPO- a documentary drama 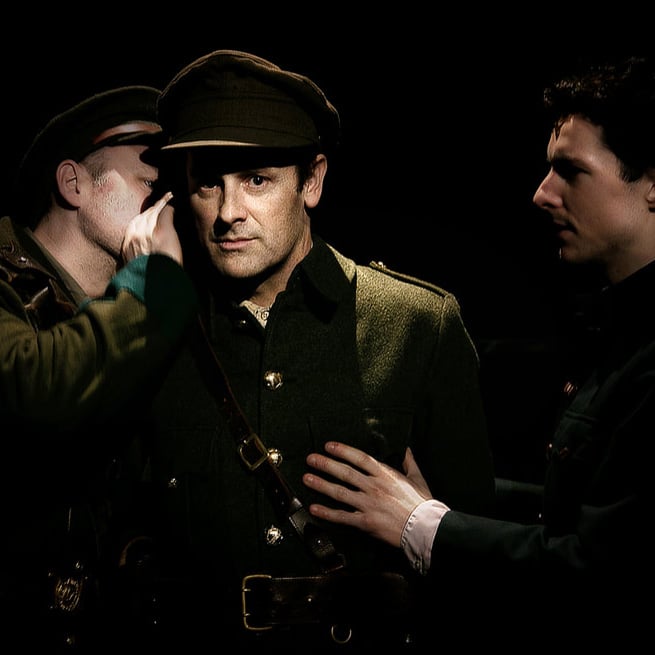 Fishamble’s Inside the GPO by Colin Murphy was a must-see cultural event at the heart of the 1916 commemorations. This unprecedented documentary drama, directed by Jim Culleton, was a once-in-a-century opportunity to experience the Easter Rising, in the main hall of the GPO itself.

Audiences witnessed the rebel leadership navigate the perils of the Rising across the five days during which they occupied the GPO.

On Monday, they seized and secured the building, repelling the first attacks.
On Tuesday, they attempted to deal with looting on O’Connell St.
On Wednesday, the shelling started.
On Thursday, the building caught fire.
On Friday, they were forced to evacuate.

The filming took place in April 2016 in the GPO, Dublin. This year, Fishamble is delighted to present a specially remastered version to share with audiences around the world from 1 – 5 April 2021 to celebrate the 105th anniversary of the Rising. With support from Culture Ireland, Fishamble is working with a network of theatre organisations, Irish Heritage & Cultural centres, and Irish Studies courses internationally, including the New York Irish Center, Solas Nua, Corrib Theatre, AEDEI and IASIL.

Fishamble is an Irish theatre company that is passionate about discovering, developing, and producing new plays of national importance with a global reach while championing the role of the playwright. #InsidetheGPO

Inside the GPO was originally produced in partnership with Fáilte Ireland, Dublin City Council, Ireland 2016, An Post, DublinTown, & Arnotts. This online presentation is supported by Culture Ireland.