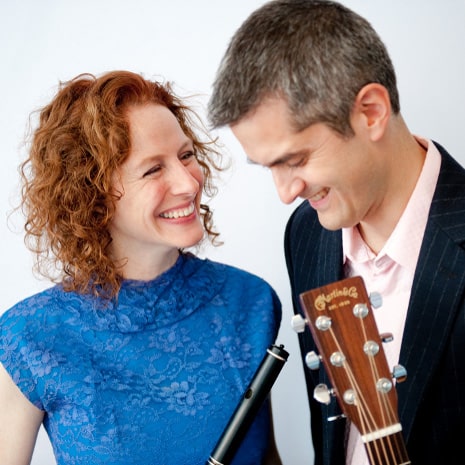 Boston-based Matt and Shannon Heaton play updated and traditional Irish music on flute, accordion, guitar, bouzouki, and voices. This event will be free on Facebook Live – a wonderful treat on Valentine’s Day!

With engaging stage presence and masterfully-crafted music, Boston-based Matt and Shannon Heaton offer well-traveled Irish music from the heart. Steeped in sessions in County Clare and brewed in the acoustic music scenes of Chicago and Boston, their flute/guitar/bouzouki instrumentals and sweet husband-and-wife harmony singing draw deeply from the Irish tradition.

The Heatons also gently incorporate the Thai music Shannon learned as a kid and rootsy Americana sounds that surrounded them during their three years in bluegrass-haven Boulder, Colorado.

Since their move to Boston in 2001, the Heatons have become an integral part of Boston’s vibrant trad music scene. Shannon co-founded Boston’s Celtic music fest and served on its board for 15 years, creating performance and mentoring opportunities for hundreds of traditional musicians and dancers. She was named Massachusetts Traditional Artist Fellow in 2016, and she hosts the culture podcast Irish Music Stories.

Matt has performed with countless ensembles, including the Karan Casey Band, Boys of the Lough, and Robbie O’Connell. In addition to his work as an Irish accompanist on guitar and bouzouki, Matt is an active performer for children and families. He has received multiple MCC grants for his engaging sing-alongs and rockabilly tinged albums. He also fronts surf-rock band Electric Heaters.

Matt and Shannon are comfortable onstage and have a warm connection with their audiences. They are world-class American performers with Irish roots and universal appeal.