John C. Van Orman returns to Minnesota together with bandmate Adam Helwin for a concert at Celtic Junction. The duo will be joined by Todd Menton (Boiled in Lead), Drew Miller (Boiled in Lead, Kinda Fonda Wanda), and Mark Black (Other Country Ensemble) for this noteworthy event.

The music of Van Orman & Helwin blends textures and texts of antique and modern soundscapes, familiar enough to be warm and welcoming, adequately exotic to be fresh and surprising. They share traditional and contemporary songs of a world populated by cowboys, sailors, moon goddesses, and many sorts of lovers.

Van Orman’s regional mark is made clear by the Minnesota artists who have covered his songs over the years; Boiled in Lead, Bill Hinkley and Judy Larson, Sherry Minnick, and The Flash Girls are a diverse lot whose recorded performances of his songs reflect the breadth of Van Orman’s appeal.

The concert is in conjunction with the release of Van Orman’s newest recording, Flight to the Moon, on Omnium Records.

“A songwriter, singer…He’s a savant. He’s out on the cutting edge.” – Bill Hinkley, on MPR 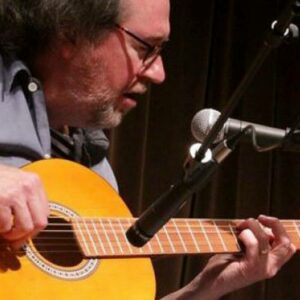 A veteran of the folk music scene since 1973, John C. Van Orman supplies vocals and plays an array of instruments, including six and seven-string guitars, hurdy-gurdy, harmonium, Anglo concertina, and nyckelharpa. He has received Minnesota Music Academy awards for his songwriting and performance skills and is the former Music Director of the Ozark Folk Center in Arkansas. 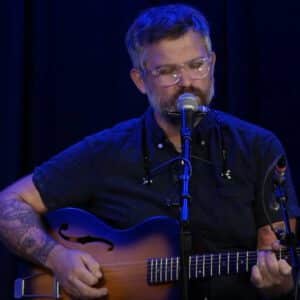 Adam Helwin, who cut his teeth on the Milwaukee punk music scene, provides both lead and backup vocals and plays guitar, banjo, and harmonica.  He is a remarkable singer-songwriter with a powerful and often haunting delivery of his own material as well as his original interpretations of compositions by others. He also plays with the Lakeview Ramblers, supplying vocals and string bass for that regional string band. Besides being performers of traditional material, John and Adam are modern bards whose lyrics reflect both the humor and the pathos of human experience.

Tickets will be available online till 4 pm on the day of the show. After that, you can purchase admission at the door for $20. Youth 18 years and under receive free admission.