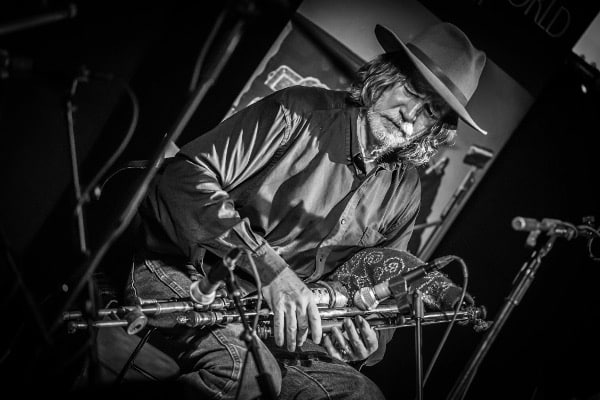 Uillean piper Paddy Keenan, founding member of The Bothy Band and 2002 Gradam Ceoil Musician of the Year, is returning to the Celtic Junction for a solo concert.

Paddy Keenan was born in Trim, Co. Meath, to John Keenan, Sr. of Westmeath and the former Mary Bravender of Co. Cavan. The Keenans were a Traveller family steeped in traditional music; both Paddy’s father and grandfather were uilleann pipers. Paddy himself took up the pipes at the age of ten, playing his first major concert at the Gaiety Theatre, Dublin, when he was 14.

Paddy’s flowing, open-fingered style of playing can be traced directly from the style of such great Travelling pipers as Johnny Doran; both Paddy’s father and grandfather played in the same style. Although often compared to Doran, Paddy was 19 or 20 when he first heard a tape of Doran’s playing; his own style is a direct result of his father’s tutelage and influence.

The Bothy Band, one of the most influential bands of the 1970s, forever changed the face of Irish traditional music, merging a driving rhythm section with traditional Irish tunes in ways that had never been heard before. Those fortunate enough to have seen the band live have never forgotten the impression they made — one reviewer likened the experience to “being in a jet when it suddenly whipped into full throttle along the runway.” Paddy was one of the band’s founding members, and his virtuosity on the pipes combined with the ferocity of his playing made him, in the opinion of many, its driving force.

Paddy’s style continued to mature in the intervening years since the break-up of The Bothy Band as he pursued a solo career. He has brought traditional music to audiences around the globe, playing at festivals including the Rainforest World Music Festival in Borneo, CeltFest Cuba in Havana, and concert tours across Japan, Europe, Australia, and North America. He is featured on the soundtrack of “Traveller”, starring Bill Paxton and Mark Wahlberg, for which he composed and arranged two pieces of music. In the mid-2000’s, Paddy and singer Liam Ó Maonlaí (Hothouse Flowers) traveled to Mali, West Africa, to embark on a 3,000 mile long journey across the desert to perform at Le Festival au Désert, the world’s most remote music festival, near Timbuktu. In 2008, a documentary of their travels was released. Directed by Dearbhla Glynn, ’Dambé: The Mali Project’, highlights their journey and collaborations with Malian musicians across the Sahara. Recently, Paddy performed at the Irish Embassies in Moscow, Russia and in Tallinn, Estonia.

Paddy’s contributions to traditional Irish music were honoured in 2002, when he received the TG4 Gradam Ceoil Musician of the Year award, which is presented to musical heroes of the modern age, and in 2011 by the Irish Music Association, with a Lifetime Achievement Award.

$20 tickets are available to purchase online till 4pm on June 18th, after that, you can purchase admission at the door for $25. Youth 18 years and under receive free admission.