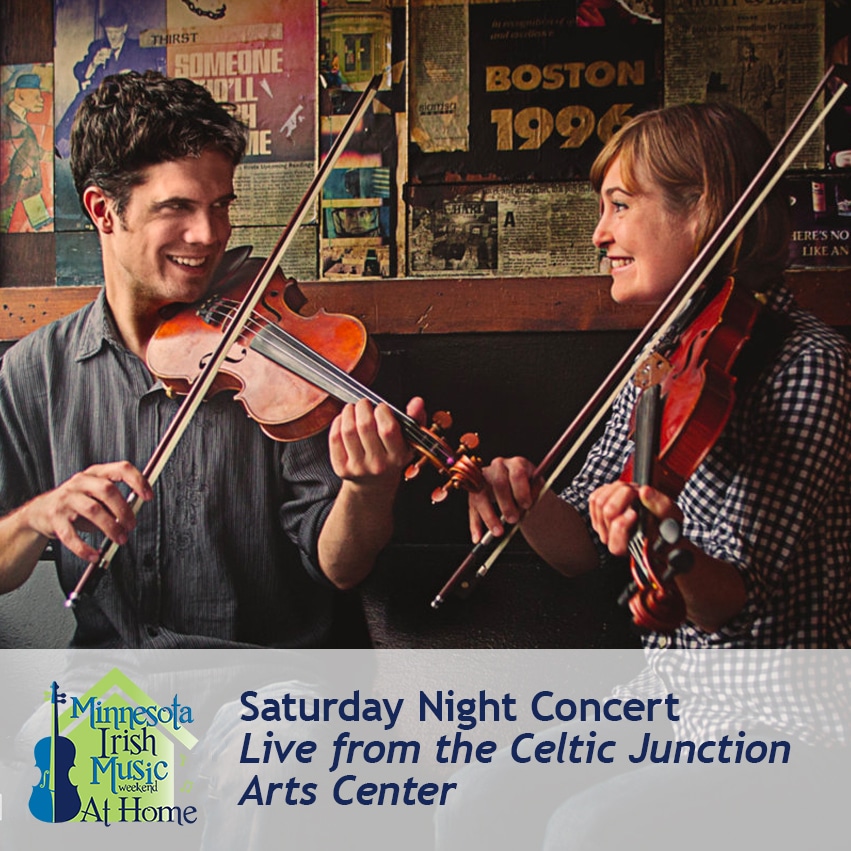 Martin McHugh & Friends (opening set)
Martin McHugh, master accordion player and well-loved keeper of Irish tunes,is recognized for his role in sustaining and fostering Irish music around St. Paul, Minnesota during the 1960s and 1970s and remains a strong and influential presence today. Originally from Castlerea, Co. Roscommon in Ireland, Martin has inspired and encouraged a great number of the musicians who make the Twin Cities such a lively Irish music scene. His music, musicianship and good humour have enlivened many a session, fueled many a player, stirred many a dancer’s foot, and gladdened many a heart.

Martin will be joined by musical friends Laura MacKenzie, Dáithí Sproule and Mary Vanorny for an opening set for this landmark live concert!

Nathan Gourley and Laura Fedderson with Brian Miller
“Life is All Checkered”, Nathan and Laura’s debut duo album (with Brian Miller) was on Trad Music’s list of top 5 albums in 2014. “Beautifully layered and rendered, it has a deep earthy sound that is both gritty and welcoming at the same time.” We are thrilled to welcome them to Minnesota to headline the 13th Annual Minnesota Irish Music Weekend Saturday night concert.

A stylish Irish-style fiddler, Nathan Gourley won Boston’s Fiddler of Dooney competition in 2013 and was a finalist in the 2014 Sean Ó Riada fiddle competition. With strong local connections, Gourley is a former member of Chulrua, the Doon Ceili Band, the Two Tap Trio, and the Máirtín de Cógáin Project. Nathan performs at countless concerts, ceilis, sessions and festivals in Boston and throughout the United States and Ireland.

Laura Feddersen grew up in a musical family in Bloomington, Indiana. After spending much of her childhood asleep in her father’s bass case at dances and music parties, she took up the fiddle herself, playing for the square and set dances in her hometown. Laura has since traveled extensively throughout the country playing and teaching fiddle, and is renowned for her unique and skillful interpretation of Irish, American, and Irish-American traditional music. She now resides in Boston where she plays the pubs, parties, and park benches with some of the best traditional musicians in the country.
+ Google Calendar+ Add to iCalendar