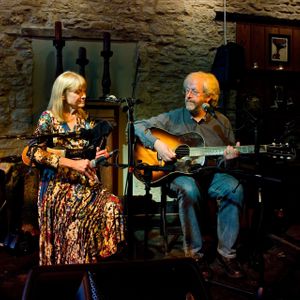 Dáithí Sproule, well known for his pioneering guitar styles, deep knowledge of Irish song, and his place in the internationally acclaimed ensemble Altan, is a brilliant musician and a virtual font of cultural knowledge and lore. He has been a major force behind the success of traditional Irish music in today’s popular culture.

Multi-instrumentalist Laura MacKenzie has received an abundance of honors and awards for her work in traditional music, both Irish and Scottish, and is quite unique in the diversity of her instrumental skills. For many years Laura has been at the heart of the revival of Irish music and dance in the Upper Midwest, and has performed across the nation.

Sproule and MacKenzie have been making music together in various ensembles for decades, and now present a wonderful concert duo, featuring a rich gamut of traditional Irish and Scottish music and song, plus Dáithí’s recent compositions. A selection of their music can be enjoyed on The Pinery CD.
Dáithí and Laura’s performances are delightful soundscapes of music and song woven together with the lore learned over lifetimes in traditional music. MacKenzie’s arsenal of wind-powered instruments (wooden flutes, whistles, various pipes, and concertina) are all featured, joined by Sproule’s fresh, famous and innovative guitar accompaniments and solos. They are both esteemed singers as well, and selections from their treasure trove of traditional song are presented in beautiful arrangements.