Cancelled: Byrne and Kelly in Concert 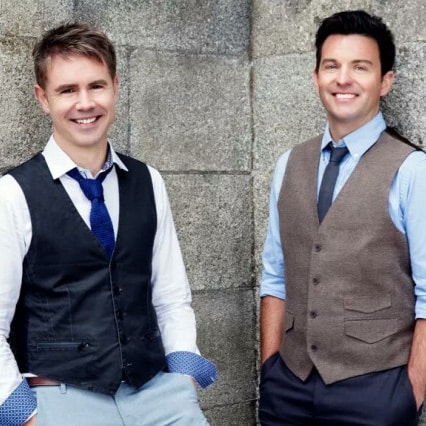 Unfortunately, the Byrne and Kelly tour has been cancelled due to illness. We send the lads best wishes and quick healing. If you’ve purchased a ticket for this concert, it will be refunded automatically.

Celtic Thunder’s Neil Byrne and Ryan Kelly are coming to Minneapolis for a night of music and storytelling.

What began as Celtic Thunder’s Neil Byrne and Ryan Kelly performing a series of shows together called ‘Acoustic By Candlelight’ back in 2012 has turned into what is now known as Byrne and Kelly. Driven by dynamic vocal harmonies, the duo seamlessly combines genres like traditional Irish and Americana to create a fresh, Celtic folk sound that has garnered comparisons to iconic folk-rock duos like Simon & Garfunkel and The Everly Brothers.

Byrne and Kelly’s latest release, Echoes, is a collection of nine original tracks and the well known Irish classic ‘Step It Out Mary’. The follow up to Echoes came in film format with the release of a music documentary film titled Echoes: The Story which delves into the history and songwriting stories behind the tracks from the Echoes album and explores the Irish landscapes and landmarks that inspired it. The film picked up two awards from the World Music and Independent Film Festival for ‘Best Music Documentary’ and ‘Best Original Soundtrack’.

Online ticket sales will be available until 4pm on June 25th. If tickets are still available at that time, you may purchase them at the door. Special meet and greet will be prior to the performance.

For more information, check out this article or visit their website.